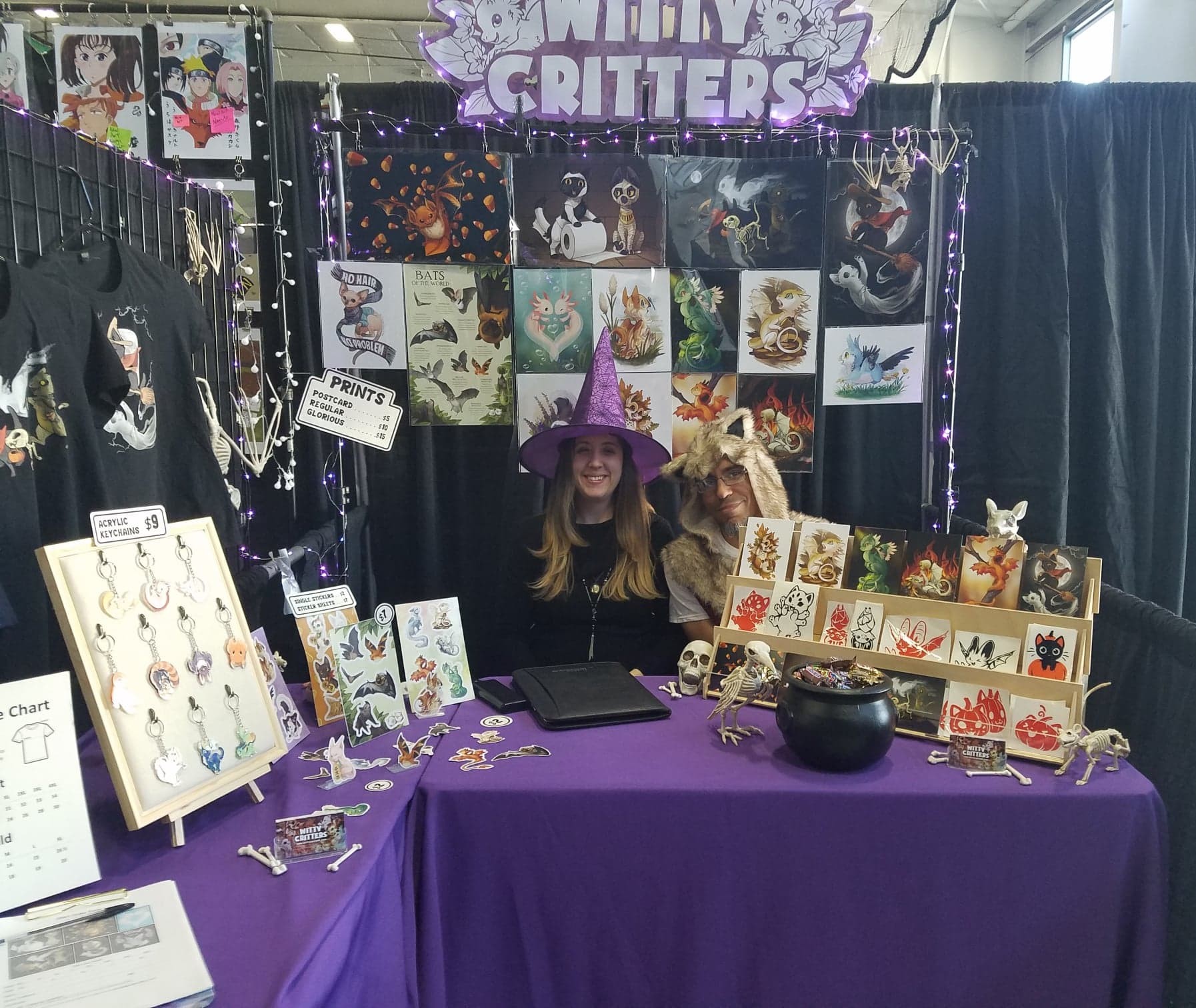 A rundown/review of our experience selling at Fear Con for the very first time! I was not sure what to expect, as I’d only talked with one other person who had sold there… and their experience was negative. But I thought it would be hard to go wrong with cute Halloween-themed stuff at a Halloween-themed convention.

From the very start, it was a little odd: we were told we needed to bring our own lighting because the venue would be “dimly lit,” and we were also told we HAD to set up the day before the event; we would not be allowed to set up day-of. The original vendor info email said that setup was from 12 to 8. Because my car is in the shop, I was going to wait for my sis to get home, take her car, get there at 6, and have two hours to set up my modest booth. But then, around 4pm, I noticed that the website said setup closed at 6 instead of 8! So I panicked and took a Lyft there instead. The 6pm closing time was the right one… good thing I noticed.

I had purchased their smallest booth, a 5′ x 5′ space. I obediently arrived with my limited selection of Halloween-themed merchandise, enough to fill a single 4′ x 2′ table, only to find…

…they’d upgraded me to a 7′ x 10′ booth! SURPRISE! Later, I found, buried deep in my phone’s history, a text message they sent about a month earlier (that I’d never seen for some reason) asking me if I wanted to upgrade. So they DID notify me beforehand, but it somehow slipped past my radar, and I was completely caught off guard by the tripled square footage.

Luckly, I lived only 15 minutes away, so I was able to rush back home and get more stuff. I originally planned to only sell Halloween merch, but ended up bringing my entire product selection instead.

The rest of the setup went wonderfully, and we ended up with a lovely booth as you can see in the first photo. It was easy to find parking, which was free. I had my vendor passes within 5 minutes of arriving and was able to find my booth easily. There was drive-up access to the venue and many different entrances so you could wheel your stuff right in. The aisles were spacious and I was able to get an extra table on-the-fly with no fuss at all. I’d say the only real downsides were the added costs: tables and chairs cost extra, which added up fast, and power also cost quite a bit extra even though we were told we NEEDED lighting… more on that later.

On Thursday night, I got a group text message letting us know that we needed to be in our booth and ready to go a full hour and a half before the doors opened the next day. I had not been told about this until just now. Still not sure what it was about, but we had vinyl to weed so the time went by fast.

The convention itself was very nice. Lots of costumed passerby to watch, generally polite and friendly atmosphere, and my neighbors were delightful. (shout outs to Black Sunflower Studios, Aleta Boyce, and Bored Brothers Gaming!) There was free pumpkin painting across from us, which brought a lot of kids over to look at our booth.

It did seem, though, that most of the people there were not specifically there planning to drop big wads of cash on merchandise, like you might expect at an anime or furry convention. I was able to make back the cost of my booth, but only because I was local and didn’t have to deal with hotel or travel costs. There were a lot of families with little kids, just there to hang out and do some of the activities. I sold a lot of $5 postcards and $2-$4 stickers, and not very many of my higher priced items. Interestingly, I sold more non-Halloween stuff than I did spooky-themed merch.

I mentioned the odd Thursday required setup and surprise hour-and-a-half-early requirement on Friday; another thing to note was that the Friday selling times were somewhat late compared to a normal convention. The floor opened at 3pm and closed at a whopping 11pm. (Saturday’s time was more normal, 12pm to 8pm). The late times make sense for a spooky Halloween convention and we did still make a few sales in the last few hours. What was more worrying was that it took a full hour and a half before we made our first sale on Friday. I was sweating bullets. We also made more than twice as much on Saturday as we did on Friday, which was a huge relief.

In anticipation of the “dimly lit venue,” I brought some solar-powered spotlights that I normally use in our Halloween yard setup, and I purchased some cute USB-powered fairy lights that we were able to run on a small power bank. However, the venue did not, in fact, end up being dimly lit, except for a roughly two-hour period on Saturday when the overhead lights turned off in the venue (accidentally? I don’t know). But it was high noon, so there was plenty of ambient light, and in the end we technically didn’t need any extra lighting. It wasn’t much of an inconvenience for me, but I imagine this could have been frustrating to vendors who spent more money on an elaborate light setup only to realize that they didn’t need it.

We did have a lot of fun though. I was able to break out my full repertoire of anatomically incorrect skeleton animals and bask in the Halloween spirit. Kids trick-or-treated at the booths. We got free pumpkins to paint. And because the sales were slow, Sinn was able to go out from behind the table and have some fun with the passersby, as shown. It was endlessly entertaining to watch kids and adults alike try to figure out whether he was a prop and dare each other to actually take a piece of candy.

When it came time to take down the booth, the two of us got our things packed up within 40 minutes and were on the road in another 10. We had to wheel our suitcases out about 300 feet to an open street and then I got the car and drove up and we were able to quickly get everything loaded up. We personally had no issues, but I heard from others that the loading/unloading quickly becomes a rat’s nest if you need to get right up to the doors.

In closing… I’m torn on whether I want to attend again. Now that I know more of what to expect, I might be able to cut down on costs by bringing my own table and chairs. However, even with that, the profit was not great. On the other hand, I did make a profit, it’s only 15 minutes from my house, and the convention itself was utterly delightful. Even if I don’t sell there next year, I will probably attend just to wander the vendor floor and go to the shows.

Dates may change, but I hope to be at: